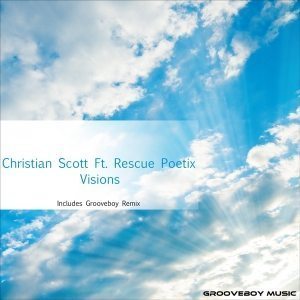 We here at Grooveboy Music are on a constant mission to bring you electronic music that is diverse and interesting and our latest release, Christian Scott Ft Rescue Poetix – Visions,  fits perfectly into that philosophy. The Original and Dub Mixes are two devastating slices of funked up 303 driven House Music while the Grooveboy turn in a quality Deep Tribal House remix.

New York based producer Christian Scott takes a break from his very successful Deep Soulful House productions and serves up something a little bit different. The original mix starts off at a blistering pace as it weaves its way through Rescue Poetix’s positive message about the power of belief. The track is dominated by some phat 303 type sounds which when layered with a chiming arp and some crisp funky beats brings back warm memories of the glory days of Acid House. The Dub mix ramps up the “Acid” and the energy a notch and reduces the vocals to some sublime spaced out phrases.

The Grooveboy remix takes things in a different direction and opts for a much deeper and moodier interpretation. The track is driven nicely by some deep tribal percussion and a bassline that fuse perfectly with the warm pads and funky synth riffs.